Mirzapur has been seen as the perfect gangster drama. The dark, bold web series is on the point, it has made us all stick to the screens. From the authenticity, the plotline, and the actors, this web series is a must-watch for everyone who enjoys a good thriller. Furthermore, the Indian web series is a crime thriller that revolves around drugs, guns, politics full of violence, and dark humour. Here are the Top 10 Kaleen Bhaiya Dialogues from Mirzapur TV Series

Since Mirzapur was released in 2018 on Amazon Prime Video, the web series has gained a cult following. A crime thriller starring Pankaj Tripathi as Kaleen Bhaiyya, Divyendu Sharma as Munna Tripathi, Ali Fazal as Guddu Pandit, and Vikrant Massey as Bablu Pandit, deliver strong performances in the series. Mirzapur season 2 was dropped last year, fans are already speculating what will happen next. As per the latest theories, Munna is the brother of Kaleen Bhaiya in season 3 starring Pankaj Tripathi and Ali Fazal, and it will be released in 2022. 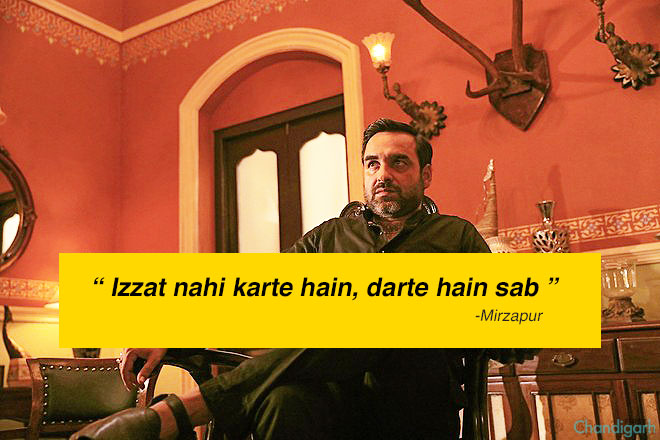 The Magnificence of Kaleen Bhaiya Dialogues Mirzapur is one of the most successful series in India. The crime thriller story that dwells deep into the lawlessness, rivalry with guns, and fights all around has a promising cast. Every actor and character in the series got all the name and fame. But today, we talk about our dear Kaleen bhaiya dialogue played by the versatile senior actor Pankaj Tripathi. Pankaj Tripathi is the powerhouse of a performer and his performance in Mirzapur in the role of Kaleen bhaiya dialogues was effortless and breathtaking.

The Amazon Prime Web Series Mirzapur created quite a buzz when it came out. Apart from the amazing performance of the actors, something that also caught the attention of the masses is the badass punchlines and dialogues from Mirzapur. After the trailer of the series, memes were trending on social media by picking up the Kaleen bhaiya dialogues from the trailer. It shows the madness of the audience and how much this show holds recognition in the mind of the audience.

Also, know the List of Best Indian Web Series That Will Blow Your Mind

What does Kaleen Bhaiya have to say about his dialogues? 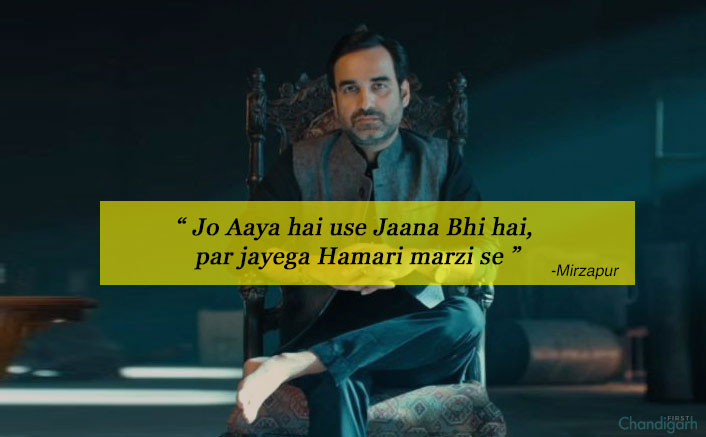 The actor shares his favourite dialogues from the previous season. The actor shares his favourite dialogue that’s in Season 2’s trailer, “Jo Aaya hai use Jaana Bhi hai, par jayega Hamari marzi se”. It is actually inspired by the Bhagavad Gita. This means that this world is temporary and people here are just guests for a short while, but people get attached to it. So, it is “quite on a philosophical level” and “I find it very interesting.” Social media was flooded with audience reactions to the trailer.

What does the writer have to say?

Like Sacred Games, Mirzapur dialogues also served to be the perfect memes that wreaked mayhem on social media and left us in splits. Karan Anshuman said that “when I wrote ‘Mirzapur’, I kept that in mind and named Pankaj Tripathi’s character as Kaleen bhaiya because we had in mind that he would smuggle the drugs under the carpets”. Anushman is an Indian film writer, director, and producer. He is the creator and director of the Emmy-nominated drama film Inside Edge. He is also the director and writer of Bangistan and the creator, director, and writer of Mirzapur 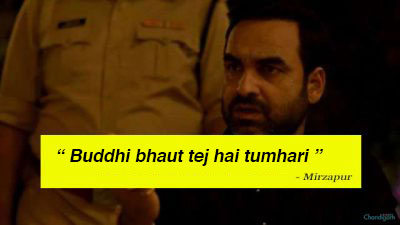 Kaleen Bhaiya was known for his pacey and trademark dialogues and we are simply going to list them here. So here we go.

Intense acting, great dialogue delivery, impeccable actors, and gripping storyline- these are just some of the many reasons why Mirzapur is a show that we all binge-watched. Not only Kaleen bhaiya dialogues but also the acting skills as the King of Mirzapur is brilliant. Even the other cast members including Ali Fazal (Guddu Pandit), Divyendu Sharma (Munna Tripathi), Vikrant Massey (Bablu Pandit), Rasika Dugal (Beena Tripathi), and Shweta Tripathi (Golu Gupta) and others have done a stellar job.

Mirzapur is a monster smash and one of the best Indian crime Amazon Prime web series. It’s also known as the backbone of the Indian web series industry. Following the conclusion of season 1, the audience was in suspense. Furthermore, the launch of season 2 was a blockbuster. Within seven days of its debut, Mirzapur 2 became India’s most popular online series. The rustics’ uncooked plot, adrenaline, and mind-blowing Mirzapur dialogues are what keep the viewers glued to this series.

Bombay High Court ruled that both divorced parents are equally accountable for their children's education.